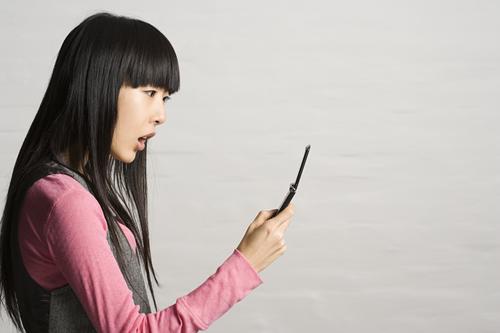 What do six sacks of potatoes, six large watermelons and an 8-year-old child have in common? All are equal to the amount of pressure texting puts on your back. (Photo by Image Source | Getty Images)

We’ve all heard about the neck and back strain associated with hunching over a computer screen on a daily basis, but now smartphones are grabbing the spotlight as the spinal stressor du jour.

According to a new study in Surgical Technology International, craning the neck over a cell phone to text, tweet, or check Facebook can exert an extra 60 pounds of weight on the head of an adult, leading to potential spinal problems.

This graphic shows the effects of all that texting on your spine, leading to a whopping 60 pounds of extra pressure. (Photo courtesy of Kenneth K. Hansraj, MD)

Study author and New York spinal surgeon Dr. Kenneth K. Hansraj created a model of the cervical spine to measure the amount of gravitational force exerted on the human head during this common activity. He measured the force at various angles and found that the farther your head falls forward, the more dramatically the weight increases on your neck and spine.

To put this number in perspective, 60 pounds is roughly six sacks of potatoes, six large watermelons or an 8-year-old child. Hansraj writes that good posture is when the ears are aligned with the shoulders and shoulder blades. Losing the spine’s natural curvature will lead to more and more stress over time, causing “early wear, tear, degeneration, and possibly surgeries.”

The idea to look into spinal stress struck Hansraj when he started seeing patients coming into his office at a younger age complaining of neck and back pain. “I remember one man in particular who we found out was crouching over an iPad playing video games four hours every day,” he told Yahoo Health. “It’s amazing how many people globally are in a ‘heads down’ position.”

Most people spend two to four hours a day on phones and other tech gadgets, resulting in at least an extra 700 to 1,400 hours of stress on the neck and spine each year. Despite this, even as a back surgeon, Dr. Hansraj says the goal of his research isn’t about lessening use of new technology.

He sees it more a matter of correction. “My message is about bringing consciousness to the use of these devices,” says Hansraj, who suggests using gadgets at eye level when possible to reduce the stress on your neck and spine. You can also shift your bottom forward and lean your back against a chair while sitting, so your body naturally lowers and your eyes align with your device. “Rest your arms on your chair for extra support,” he says.

There’s no need to carry six large bags of sugar around your neck if you don’t have to.

By Jenna Birch and posted on yahoo.com